2021 Giro d’Italia LIVE STREAM: the 104th Giro d’Italia ( Tour of Italy ) is the first road cycling men’s Grand Tour of the 2021 season. The 2021 Giro starts in Turin on Saturday 8 May and the riders will complete nearly 3.500 km over 21 stages, finishing on 30 May in Milan. On Cycling Today you can watch Giro live stream for free. Here is all the info you need on the route, contenders, broadcast and streaming ahead of the Giro d’Italia 2021.

The 104th edition of the Giro will start from Turin with an individual time trial of nine kilometers that will assign the first pink jersey and decide the first gaps. The second stage of the Giro d’Italia, suitable for sprinters, goes from Stupinigi ( Nichelino ) to Novara ( 173 kilometers ) while the third will start from Biella to finish in Canale after 187 km. The first week is, as always, a showcase for sprinters and all-rounders with stages of medium difficulty. The the 9th stage of the 2021 Giro is expected to be the first real challenging stage, a 4-star difficulty stage with arrival in Campo Felice. The Giro last 8 days will be a flurry of stages destined to the make the difference, 3 of them with 5 stars of difficulty: the ascent to the Zoncolan, the stage of Cortina, and the penultimate stage of Spluga that keeps the pink race always on the wire.

The overall length of the Giro d’Italia is 3450.4 km, the stages on average measure 164.3 km each. With the only drawback being the total absence of stages in the South, all the other ingredients for an exceptional show are all there. 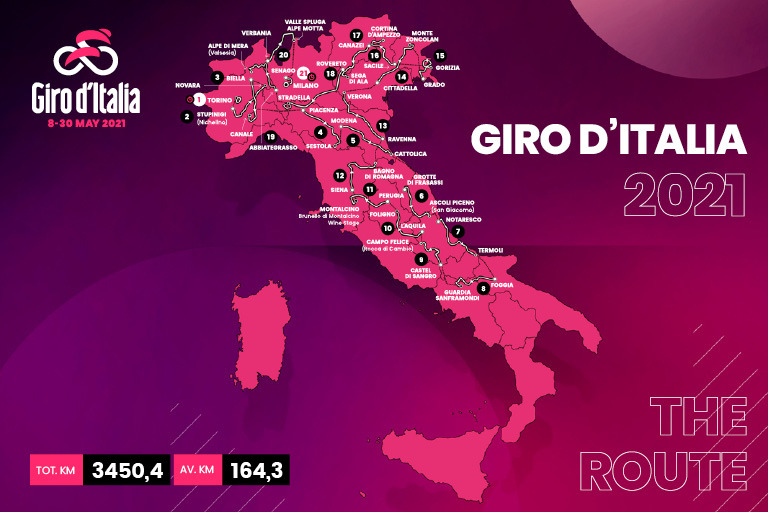 Who will win the 104th edition of the Giro d’Italia? Here are some riders to keep an eye on.

Since Tao Geoghegan Hart won’t be present to defend his Giro title, it will be up to 2019 Tour winner Egan Bernal to lead the Ineos team that does have other potential riders for the overall win with Dani Martínez, Pavel Sivakov and Iván Sosa all down to ride. Simon Yates ( Team BikeExchange ) will look to claim the maglia rosa hoping to go better than last year, when he got a positive Covid-19 test and was forced to abandon the race.

Vincenzo Nibali will likely lead Trek-Segafredo team despite recently having a training ride crash breaking his wrist. João Almeida will be hoping to wear pink once again for Deceuninck - Quick-Step, the team will also see the return of Belgian star, Remco Evenepoel after crashing out of Il Lombardia last season. Movistar will place their hopes in Marc Soler, while Peter Sagan ( Bora-Hansgrohe ) is expected to ride his second Italian Grand Tour after debuting last year, winning a stage. Fernando Gaviria (UAE Team Emirates), Elia Viviani (Cofidis), Caleb Ewan (Lotto-Soudal) and Giacomo Nizzolo (Qhubeka-Assos) will be hoping to challenge for the sprint stages.